Well this Saturday was a big success, I played with an electronic musician named Matt Riviere, which made for a less than compelling band listing (look honey, two men with very similar names. should we go to this or just go see DJ's? ...DJ's it is!!!) In the end though, we had a really wonderful crowd come out for the continuing Slum Party musical showcase series curated by Chris East and Aimee Holmes.
I was also selling copies of Wax Breast like hot cakes, so those loyal fans will obviously be featured first and foremost here! Thank you very much for that, guys!: 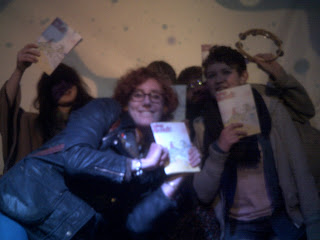 Andy Skank had his HD Flip out and got some good clips of my performance, too! How great, I know I'll personally be racking up lots of hits for his Youtube account as I watch myself over and over. You can too:
And I got some pictures of Matt Riviere to share with you as well. I really enjoyed his performance. He had a lot of complicated looking equipment and the songs were a little bit spooky and sort of like a good version of Blank Dogs in a way. You all know about Blank Dogs obviously, because everyone loves researching obscure and not even particularly good underground indie music. Check out Matt Riviere here. 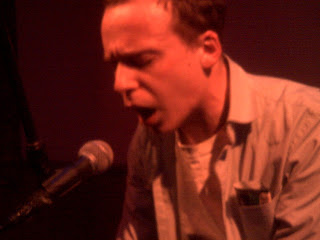 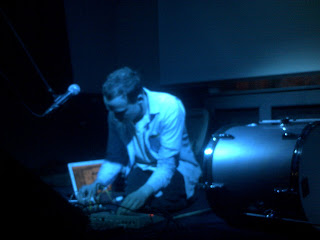 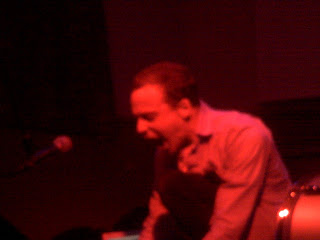 Jack Parker is a Northamptonite with a really good music blog, and he did a review of the show which is a lot better than my manic, self promoting, run-on sentence writings, so go to Power Chord for more on about this very special night. 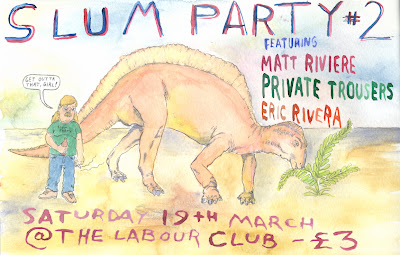 These dinosaur paintings make me laugh so hard I cry or cry so hard that I can't help but laugh. They're great.