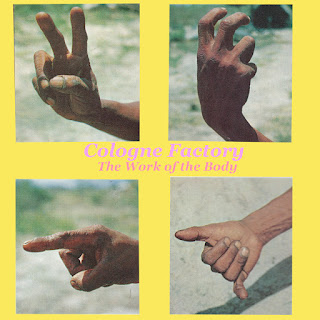 Cologne Factory is a name that will just have to follow me around for as long as I am playing this internet craftmaking video game. I guess I could change it, but what's the difference anyway? Why do I need a special creation moniker? Isn't Eric Rivera good enough? Eric Rivera is, of course, a commoner's name, like a Hispanic John Smith, with the most prolific ER being the kid who killed an NFL player in Florida about six years ago. If I have one goal in life it is to outshine the young Floridian murderer. Easy enough, you'd think, but Google is the ultimate definer of fame.

Anyway, you know the drill: I get bored and make fake record covers and post them online, then people "like" them on Facebook and I check who likes them and then maybe later I will "like" one of their links. It's a really fun way to spend your evening. Every evening. Forever.

Right now I am going to rehearsal for my real band, Energy Gown. We have a show in Indianapolis on June 11th, but I don't have all the info just yet. Don't worry, music lovers, I'll get that to you soon enough.

Hope you'll check us out.