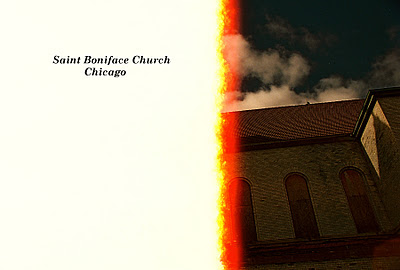 St. Bonaface was built between 1896 - 1904. It's been abandoned and responsibility tossed back and forth between the city and the Archdiocese for more than two decades now.. The community continually refuses to let the building be demolished. Currently it sits empty across the street from a park harboring both organized sports leagues and the occasional gangland-style shooting, most recently about one month ago (a man randomly shot in the groin around midnight on a warm Friday). Sometimes there are drunk crum-bum looking older guys sitting around out there but I think they're all pretty peaceable. As usual, it's the teenagers committing the most violent crimes. So, if in the area beware all teenagers of any and all background and race, if in groups of 3 or more. That's always the safest bet.

I was inspired by David Hanus' photo shoot in the church with a Chicago band. My shots didn't turn out as good as his (I think the settings were a little questionable on my ancient Canon A1). One morning I ducked under the fence of the church and conspicuously crossed the stoney lot to the back end, which looks like it's been blown out with dynamite, or at least a demolition crew or wrecking ball. 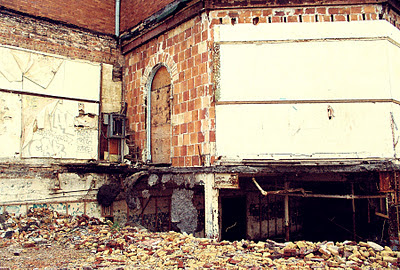 Most of the time I kept my cool inside, and explored pretty deep into the church, but at a certain point I heard some weird noises and saw shadows (turned out to be pigeons fluttering around through the broken out windows) nonetheless I was spooked. 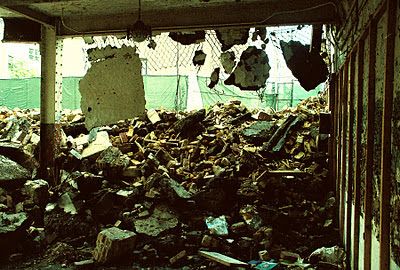 I got out of there pretty quick after that. Last time I went by, they'd re-sealed the fence, and a middle schooler was inside, you could hear him destroying things, his little gang waiting outside for him, clutching their rubber masks. It was Halloween. I told them they should all go in the church but not to break anything or do that stupid-ass tagging. Then I saw a man get run over on his bike. I didn't get any pictures of that, though! Dummy! 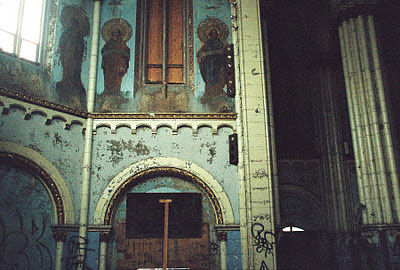 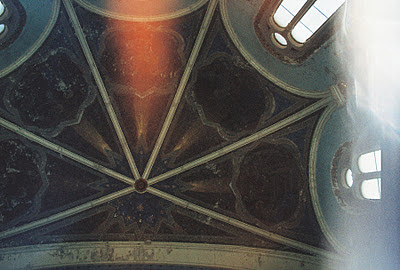 The church will now apparently be turned into a senior living center early net year, a symbolic responsibility the building will hold in literally keeping alive Chicago's link to the past. Both architecturally and biologically. 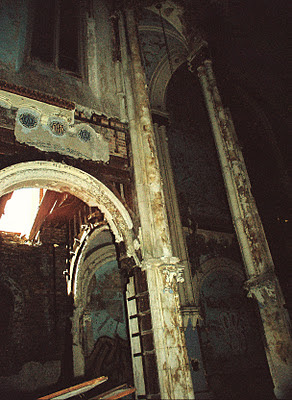