Hello! I was just starting to get lotsa HITS on this blog, but then I moved from the UK to the USA, and that took up a lot of time and energy. Now that I'm settling in to Indiana, it's time to reclaim some of you internet addicts who've inexplicably been surfing Cologne Factory.

I haven't even been doing a ton of drawing lately, so for the time being, I'll put up some work from other people that loosely ties into me.

First we have a Labour Club video shot by Andy Skank in Northampton. I played there with a completely captivating solo performer named Laura J. Martin, and Andy put up a video of my little show, featuring three whole songs!

I've also got to show you a new comic by Andy Mills of NEW YORK CITY. He's doing a series called Genius Plaza, which is what we named our house in college when we shared bunk beds and dabbled in alcoholism and psychedelics. You can visit his blog to see more. 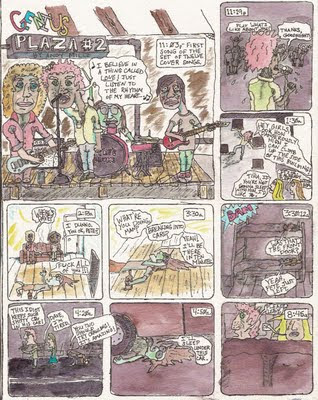 That's all for today, but I think I'll have some more junk to share this weekend.