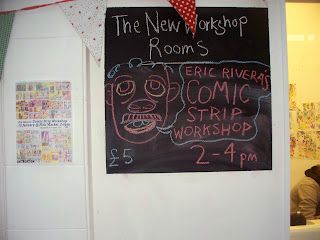 Well yesterday was the Eric Rivera Comic Strip Workshop, which was a rousing success. Kids came out to draw, so did adults, actually. The adults draw better than the kids, but the kids have power in numbers, and all of them had some very strange and creative work by the end of the session. 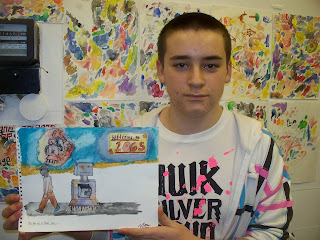 Ryan did a panel set in 2065, featuring the very best watercoloring of the day. The robot rust was particularly clever painting. 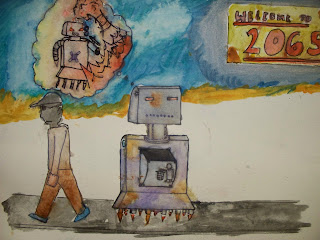 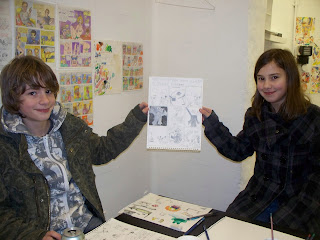 Alfie and Jemima did the old "take turns drawing comic panels" game, and the outcome was a beautiful one page comic titled "Why You Should Never Jump In a Man's Beer," about a little monster character who jumps into all the beers in a bar and gets shot out of a canon. They also had some really good sketches, see below. 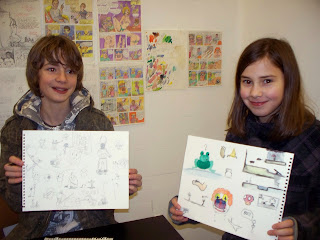 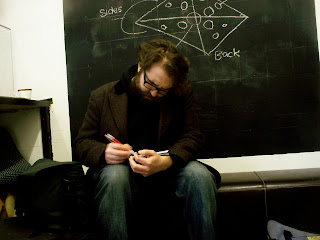 Yes, Joe staked out the cushioned leather seat and cranked out, without pause, the sharpest looking drawing style you could ask for. Hopefully you can make out the text here, Joe's a comic genius and so it's quite clever. 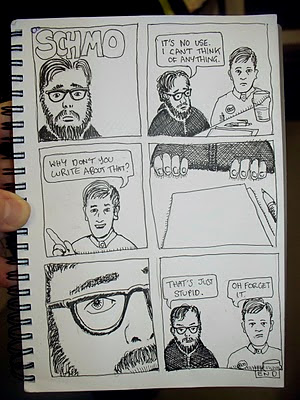 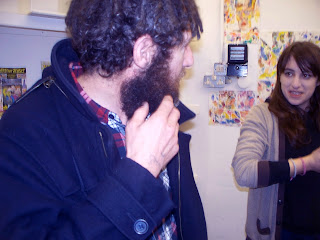 Andy recounted to Sarah the violence that sprang up, which everyone was quite alarmed about, since we normally have pretty relative peace. Unfortunately the no good teenagers (as opposed to the normally friendly ones we seem to see for the weekend music) came out and managed to really ruin the night for everyone, not just the handful of lovely people working hard to run The Labour Club, the Midland's  best live music club anywhere in Europe. So if the guys who decided to kick off like a bunch of male hens put in a pen together are reading my comic and video blog, I'll tell you now, assholes, if I see you, I'll make sure I'm trying to get you into jail where you belong, and there's a lot of guys I know who will put you in even more immediate danger than that. Some a these boys don't play. And I ain't playin. 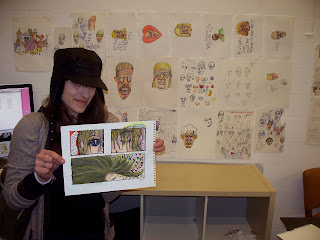 Sarah has a very nice style. She really likes a lot of color, and will add so much paint sometimes that while I watch her do it I think yikes, she's gonna mess that up, but in the end they come out like this stunning piece. The bottom panel with the flipping hair looks like it could be a shot from an anime film...and let's just compliment her nice style of dress as well! Very good hat. I made her stand in front of a wall of scrap pages I had in a box. I wanted to have some visual examples to show people who might like tips. Only somewhat helpful, but it also looked really cool. 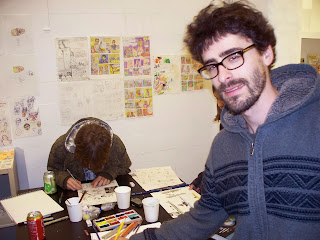 It was Barney's birthday weekend, he stopped by for a look, but I did not wish him a happy birthday. And I WILL not! 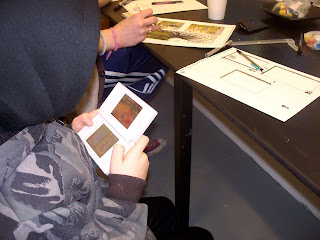 Lewis is seen here on a break from his modern art masterpiece. You could probably blow that up and sell it on a hip tshirt! Anyway, come out for the next Comicking Session in February. I forget the date. I'll ammend that later.