The World's Most Wonderful Diamond


Well hello, I haven't been putting that much stuff up, I know I know, sorry about that. I was smoking crystal meth all week and watching the Family Guy, while selling my underwear on eBay.

This is a video for Andy & Geri's new recording project. The name is a bit of a mouthful, but the lovely melodies and real beach sounds (no wait that's the old classic Garageband hiss, isn't it) will go down smooth as an Italian firefighter.

The video bit was kinnnnd of just some junk I threw together a little bit, I really liked the underwater footage I had, but then there wasn't really enough of it, so you get more children's fight scenes than you bargained for. As usual. If your reading this review, of this video, you really must be strangely interested by now, huh? Well thanks very much, but you should really be doing something else. Me, I'm getting into paper mache. I meant to say machete. paper machete is a new Brooklyn band. I'm working on their release, you'll get a video for it really soon, maybe in two days. So did anyone want to go get Bloody Mary's this Sunday at 2pm? I need some chorizo. They don't get that here in England. Just kidding, they get everything here. Except Cafe Bustelo.

Oh also about Andy Mills, he has a funny blog here, which has good articles and paintings like this: 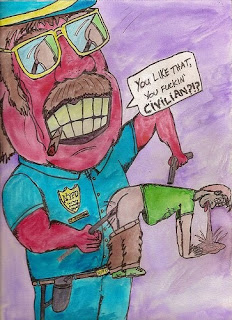 It's called Hour of the Pearl, which references a book by Steinbeck about poor people or the ocean or the bible...there's also another blog out there with the exact same title here, but it looks pretty boring. One of the artivles is called"Discovering New Mexico and a Part of Myself." Yuck.