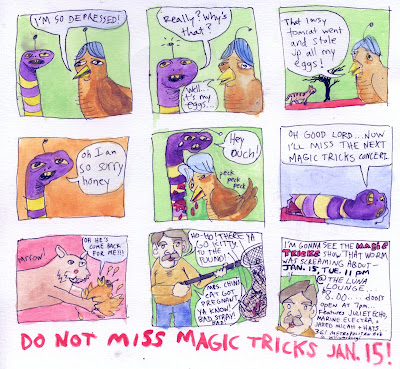 Magic Tricks: DNA in Me from Eric Rivera on Vimeo. 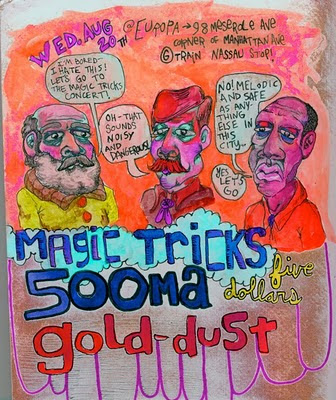 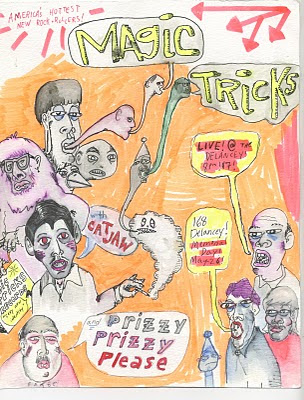 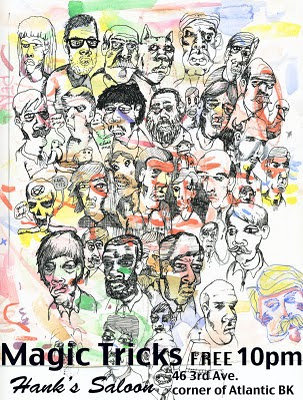 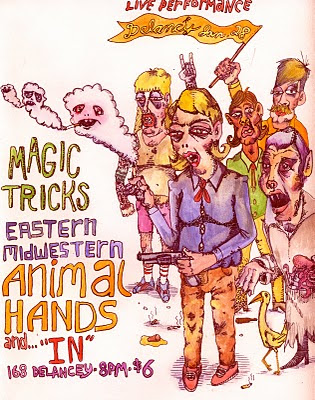 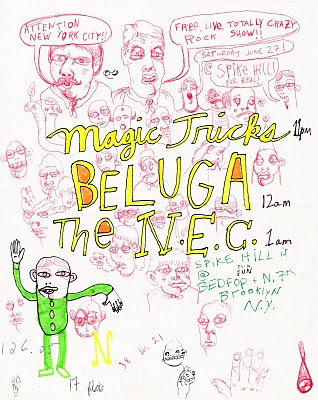 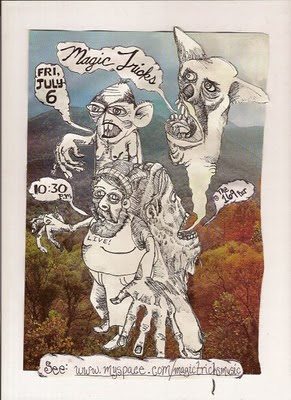 Hello, I was just looking at some old junk on my hard drive (I'm very into old junk you know) and I found some Magic Tricks stuff. Remember those guys? Ah yes.

Playing in a band in New York totally sucks, mainly because the venues are so horrible. All of the venues listed in these flyers are garbage and should not be given any money. Instead, you should upper deck their toilets. That's where you hoist yourself up and poop in the top part of the toilet, the part with that balloon thing that always seems to mess up, and then you always manage to fix it by yourself and think, "hey I'm pretty smart, I figured that out and did my own plumbing," but you're not that smart, those are just really simple to fix.

You realize that you're dumb the following week when you have to assemble your own bed frame and it takes you 6 hours.

Hey New York venues, since when does anyone anywhere charge $8 or $10 or $12 to see a local band on a Wednesday night? Why are you charging $7 for a pint of beer on top of that?! Stop charging so much! You are destroying whatever might be left of a local music scene in what was once the source of the lion's share of great new music for the entire PLANET...Unless you're counting villages in third world Africa, where the actual best bands of all time apparently play on the street every day, with instruments mostly built out of gourds or Radio Shack kits.

Of course people don't seem to care much about bands these days anyway, all the girls now really want to go out with DJ's, which is funny because it's like a guy pretending to rock the party...I mean, whatever that program is that matches the beats, I could figure it out, and match like a Wizard of Oz song with the Black Sabbath War Pigs beat and then fade into an MIA single...or whatever...but frankly, DJ's, I'm just not THAT impressed. You're tricking everyone. DJ's are tricking women.

No one reads my blog, why am I writing this.

i just read this for the first time just now. i laughed through my being very sick. i'm getting what i deserve. paying penance...for my lifestyle? ha. that would involve centuries of burning. this current cold will juuust about cover the indulgence of my most recent meal.

do you have that one cologne factory drawing with the bird smoking the cigarette? remember that one? i think it had some fake spray paint on it. those little circles of tiny dots. that's what spray paint really is, so what about it makes that thing fake? wax breasts. i can't stop thinking about them.