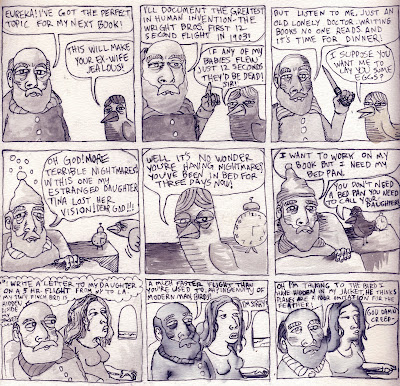 Here's a comic I drew that Pete Voakes wrote. He was going to write a bunch for me to draw, but when he saw this, he realized that I flagrantly disregarded his script after a few panels (I don't think there was an airplane scene in the original stick figure rough draft he gave me, for example).

Anyway, I always like to draw this old bald guy, so you should expect more from him, generally he's very depressed and mostly he spends his time writing letters to his estranged daughters.

Yay the little bird is back! He's awesome.